Our Mission:
To provide the greater Galesburg community the opportunity for involvement in quality theatre arts.
﻿
﻿﻿Our Vision:﻿﻿
Prairie Players Civic Theatre (PPCT), a long standing community theatre, continues to create quality productions and enrich the community through educational and entertainment opportunities. Theatre as an art form offers a variety of experiences for both participants and audiences. PPCT believes theatre is for everyone and seeks diversity in programming, not only for the enjoyment of all, but also to give volunteers of all ages the chance to work together. Our commitment to the arts extends beyond theatre. PPCT actively seeks collaboration with other organizations to support the fine arts in Galesburg and its surrounding communities. 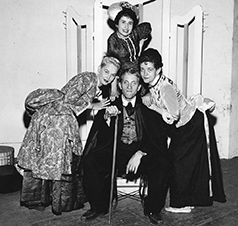 Our History:
Prairie Players Civic Theatre was originally founded in 1915 as Prairie Playhouse and was incorporated in 1959 as a 501-c(3) not-for-profit corporation. In 1968, an old but structurally sound church building at 656 W. Losey Street was purchased. The facility served as home and performance space for Prairie Players. Over the years, PPCT has performed in tents, at Knox and Carl Sandburg Colleges and for several years as a dinner theatre in various settings. In 1982, PPCT organized the initial fund drive to restore the Orpheum Theatre as a performing arts center. In 2007 PPCT purchased 160 South Seminary Street and it has served as the organization's primary performing arts facility since November 2015.
﻿Our Board:﻿
Missy Roberts: President
Carole Buebe: Vice President
Angel Peterson:  Secretary
Shari Robinson: Treasurer